The West Barnstable Conservation Area is one of Cape Cod treasures and one of its prime riding areas. It's a 1200 acre parcel of conservation land in the village of West Barnstable. The main recreation focus is multi-use and revolves around mt.biking, hiking, trail running and cross country skiing. Hunting is allowed in season. Motorized vehicles are not allowed.

This area is very atypical for Cape Cod vegetation. American beech, Red oak, Sassafras, White pine, and American holly make up most of the tree canopy. The understory consists of Sweetfern, Bayberry, Greenbriar, Spirea, and low bush blueberry, to name a few.

There is approximately 21 miles of singletrack that wind throughout the West Barnstable Conservation Area. The majority of singletrack is short and steep with some very twisted sections. Though the trails are not very technical, they’re full of short steep climbs which make for a great aerobic roller coaster ride.

Maps are available through the Conservation Department and at the top of this page. Cape Cod NEMBA has built a scenic overlook in this area as well as naming and marking the trails with signs.

The trails were originally a 9 mile enduro motorcycle loop back in the 70's It is now a meticulously maintained and marked with over 20 miles of singletrack trails. Fire roads and fields add to the diversity. In the early 80's a couple of local legends, Doug Jordan and Art Hastings grabbed their Univega Alpha Unos and attempted those motorcycle trails which were straight-up-and-down-over-the-bars-rear-tire-skidding steep. At the end of 9 miles with tears in their eyes and many bruises, they called the area the "Trail of Tears". A name that has faded with time and the many improvements that Cape Cor NEMBA and the town of Barnstable have made over the years. Now the trails are mostly a pleasant fast rolling challenge. Although there many areas to ride on the Cape, the West Barnstable Conservation Area is one of the best.

How to get there:

The parking lot is located just off exit 5 on the mid-cape highway, Route 6. From the East take a right off the exit then another right. That is the Service Road. If you're coming from the East turn left at the end of the exit ramp and then turn right on the Service Road. Parking is approximately 300 yards down on the left. Start here and your ride begins with hills.

Another parking lot is located at 1590 Race Lane on the South side of the conservation area. From exit 5 head south on Route 149 until you get to a small rotary. Turn right on Race Lane and follow it for just under two miles. You'll see the parking area in the woods on your right where Farmersville Road intersects with Race Lane. Start here and your ride begins on flat singletrack.

How to volunteer to care for this park:

Cape Cod NEMBA does regular trail care of the trails and works with Barnstable's Conservation Commission to protect and preserve this trail system. Contact Cape Cod NEMBA to find out about the next trail care event. 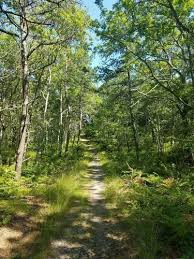